Skip to content
Hair bobble dangling from a strand of hair (her remaining hair forming a frizzy halo around her face), token grazed knee, PE kit (complete with 10 missing vests/socks/someone else’s plimsolls), Bat Man water bottle precariously balanced on top of a bulging book bag, coat wrapped around her waist – my daughter emerges from school on the last day of term before the Easter Holidays looking like one of the Twits from the Roald Dahl classic.  Amongst the chaos of her appearance she is carefully cradling a bun case and her little face is beaming; “Look Mummy, a chocolate bun with eggs inside”.  Hoping that perhaps I just hadn’t heard about the non wheat containing product ‘Shredded Wheat Free’ I ask “Is it Gluten Free?”  Wishful thinking.  “I’m sorry sweetheart but you can’t eat that.”  “Can I eat the eggs”?  “No”.  “Can I just lick the eggs?” “No”.  Peggy astounds me with her reaction; “OK”, passing the chocolate shredded wheat bun to her baby brother (who can’t believe his luck) she legs it full force to the end of the playground where her best friend is playing around a tree.  Not a whinge.  Not a moan.  I’m left arranging the school paraphernalia carefully onto the pushchair like a Sherpa on the Inca Trail and could cry with pride.
This resilient, hardy, tough demeanour of our kids never fails to amaze me. I’ve heard it time and time again, “they’re much more resilient than you think, Kids” but its not until you go through some kind of ‘test’ like an illness, separation, death in the family that you really see it.  There have been so many times that she has, not through lack of careful planning or attempting to prevent the problem, displayed this resilience.  Like going to her friends party.  Calling the venue before hand to make sure they can cater for her and provide an alternative.  The childs parent calling the venue to make sure all is OK to cater for Peggy.  Reminding them upon arrival that she has coeliac disease and to please inform the kitchen….then the food comes out and the kitchen has forgotten. She waits, patiently nibbling on a fruit platter until her GF spag bol arrives.  I feel massive disappointment on her behalf, but actually, Peggy loves the attention when the GF spag bol comes out and the other kids want what she’s having!  She doesn’t care.  She’s happy.  She’s at her mates party, why wouldn’t she be.  It’s the reaction of us ‘grown up’s’ that is most uncomfortable.  Me apologising to the Mum for “being awkward”, Mum apologising to me “I reminded them that she was gluten free when we got here”, waitress – “I am so sorry I don’t know how this happened”.
We want to protect our little ones all the time don’t we.  Wrap them up in cotton wool and protect them from the cruel, gluten filled world we live in.  But in actual fact, life is (without wanting to sound like a depressing ‘Morrisey’ track) full of disappointments.  But are they disappointments when you’re 6? 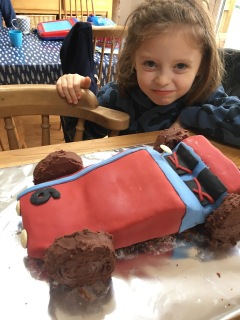 the tree’s’ as she put it and have a picnic in the park with some family and friends.  We were taking a cake, had ordered the party bags and bought some balloons to decorate a picnic table.  The day before we hopefully checked out the weather forecast; snow (in March!?) We broke the news to her that it wasn’t going to happen.  Fully prepared for sobs of disappointment and promises of a family night tonight to make up for it (FYI family night =  pizza in the lounge watching a film and staying up until 8pm!) her reaction was “can we see D’mitri and Henry still?”  You see for Peg, seeing her pal’s (whether swinging from a tree or playing at her house) was actually all that mattered.

I thank our lucky stars for Peggys early diagnosis.  At 5 years old we can put a life-long gluten free diet in place before any lasting damage is done in her development or growth (hopefully).  She will probably have little memory of life as a gluten guzzling 0-4 year old and not know any different. 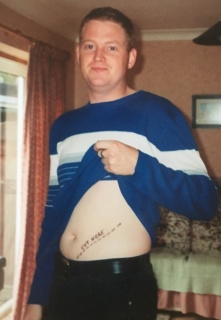 When Chris was diagnosed as having Chohn’s disease in his late teens he was studying at College with aspirations to go to University to become a journalist.  Living the life of most carefree teenagers his main priority was girls, booze, raves (it was the 90’s!), his mates, a mini metro and earning some money on a weekend to fund all of the above.  To find out he had Crohn’s Disease at this point in his life must have been ‘a major head f**k’.  It dictated the direction his life took from here on in; the career he chose, the holidays he went on, relationships, his social calendar.
One particular Crohn’s episode in his late teens saw him hospitalised.  The only ward in which they could find him a bed was the childrens ward.  Chris pinpoints this exact moment as being the defining experience in his life which suppressed the anger he felt towards Crohn’s Disease.  It made him grateful for what he did have rather than being consumed in the things he no longer could.  Surrounded by children, some terminal, displaying huge bravery and resilience – something shifted in his head and life went on in a more positive way.

Resilience, strength, bravery, call it what you will.  I have learnt so much from our daughter in this past 6 months and my husband in the 8 years I’ve known him.  I think it’s called perspective.  After all, who gives a shit about a chocolate bun when theres a tree to swing off with your mates?